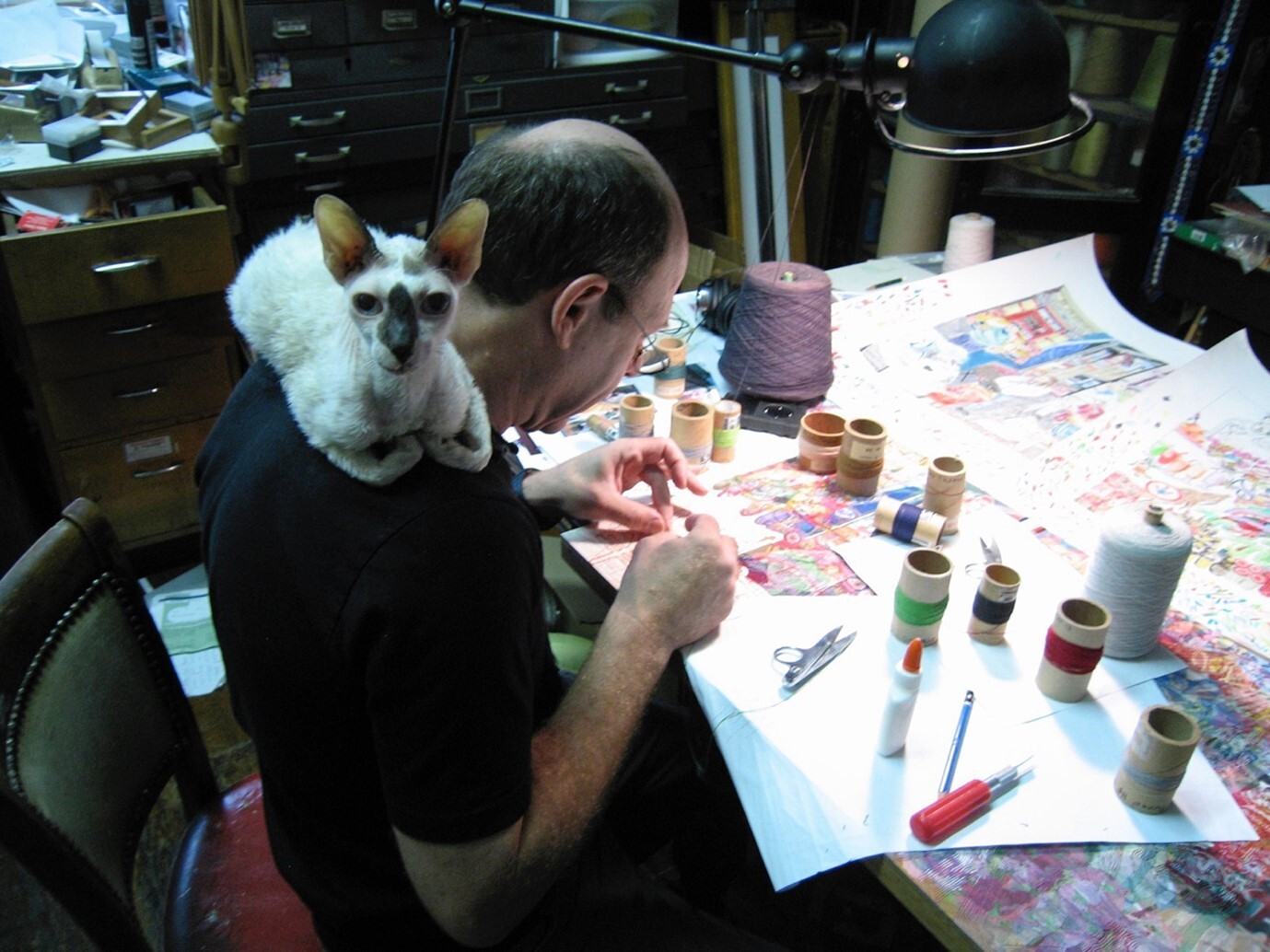 Robert Forman (Mexico, 1992/93) has been producing yarn paintings for over 50 years. Rather than traditional paint, his work is produced using various yarns and Elmer's Glue. In this Snapshot, Robert reflects on this technique and on his longterm collaborations with the Huichol yarn painters of Mexico.

When I first glued some of my mother’s embroidery thread to a collage back in high school, I wasn’t planning to be still at it 50 years later. I had begun drawing at the same time. The string mimicked the pencil line with the advantage of not smearing.

My materials include cotton, linen, silk, and rayon yarn. The diameter ranges from sewing thread to sixteenth inch cord.

Forms are rendered by the direction the yarn is glued as well as color changes. Yarn lit horizontally is bright while vertically lit yarn is dark. The material and sheen of the yarn determines the intensity of this effect.

I am able to mix colors by alternating yarn. I can also mix a number of images using this technique.

The finished picture is sealed with Fabric Guard™. The final step is the frame, which I mill and build in my wood shop.

Latest work: 'A Walk in the Park'

The interface between my interior self and the outside world is the uniting concept behind my recent work.

Just when it seems things can’t get worse, they do. Floods, hurricanes, fires and locusts devastate the land. From Isis and Christian Evangelicals to the Q conspiracy, the contemporary focus is on end times. Jehovah witnesses proclaim the second coming on every corner. Subtleties are ignored and uncertainty is ridiculed. The only question asked is “Which side are you on”.

Collaborations with the Huichol yarn painters

Once I was invited to show in a Manhattan gallery based on slides of my work. I brought my piece to the gallery who admired it until realizing that it was made with yarn. I was dropped from the show and told that if yarn was a legitimate art technique I wouldn’t be the only person using it.

When I first saw a Huichol yarn painting at a Greenwich Village flea market, I felt vindicated. There was a community of yarn painters. 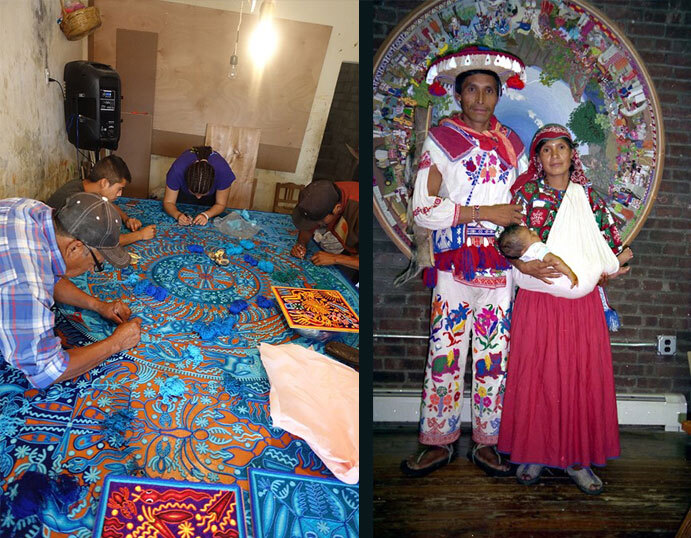 My initial Fulbright application was simple: to travel to Mexico to talk shop with fellow yarn painters.  Before traveling I contacted many anthropologists studying the Huichol. When I explained my project, I was told that Huichol are generally weary of outsiders but with luck I might be able to meet a few artists in the city.

The University of Guadalajara wrote a letter of support but unbeknownst to me my contact had been fired shortly before my arrival. Wandering the city with a couple of my small yarn paintings and a Spanish-English phrase book I noticed an art school. Sensing a familiar place I walked in. In my broken Spanish I explained my reason for being there. I was brought to the head of the school who by coincidence was Ramon Mata Torres, a scholar whose many books on Huichol art and culture I had read in preparation for my trip. My time in Mexico was full of lucky coincidences like this enabling me to meet and interact with many of the most skilled yarn painters. These relationships have endured. My family has hosted artists and travelled with me when I return to Mexico. My daughter Amelia has grown close to the children of artists I first met during my Fulbright year almost 30 years ago.

I began making yarn paintings in 1969 while still in High School. I thought I had invented the technique. In college at The Cooper Union, I first kept yarn painting to myself. My professors preferred my drawings to my paintings. My painting professor, Jack Whitten, asked what we did during vacation. I volunteered that I'd spent the vacation working on a project, but it wasn't exactly painting. After visiting my studio Jack told me to stick to yarn and he would consider them paintings.

Seeing a yarn painting at a Greenwich Village flea market I discovered that yarn painting was a traditional art form among the Wixarika (Huichol) people of Mexico. In 1992 I received a Fulbright Fellowship to travel to Mexico to meet fellow yarn painters and talk shop.

Since my Fulbright I have maintained my relationship with fellow yarn painters both by returning to Mexico regularly and by hosting Wixarika artists in my home.