Interesting observations on the US school classroom - Mohan Sharma (India, 2019/20) 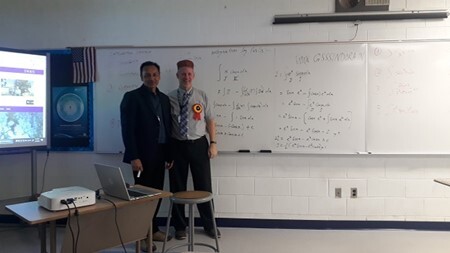 ‘Welcome Mohan’, said Mr. Robert Turk, my partner teacher of Mathematics at John T Hoggard High School Wilmington NC as I entered the classroom 211. It was nearly 60 X 40 X 9 feet, well equipped and furnished. It was a room for Math courses including International Baccalaureate courses. Mostly in US schools, there are rooms allotted to each teacher and students move from teacher to teacher connected with their courses so there can be a mixture of different grades of students sitting in the same class! Also schools that have grades of 9th, 10th, 11th and 12th grades are called High Schools! 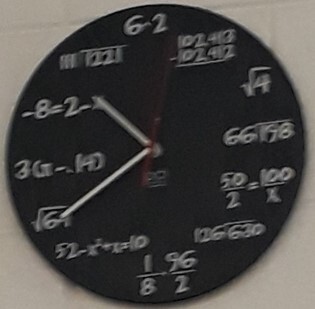 I was stuck by the wall clock incorporating different concepts of mathematics! The white board (nearly 30 X 5 feet) with more than 14 different coloured capped markers on it and extra markers, in packed bundles, in a box. The room has American flags, quotes on Math, roof LED lighting, sound system, projector, laptop, ipads, their shelf and huge shelf for course books. The maintained temperature of the classroom and school building, like every building in the US, is an excellent facility.

A corner of the white board was marked with the objective (essential question) of the first period that students will learn when the period is over. It was a great idea for objective-based learning.  There were four 90-minute slots in the school timetable with three lunch breaks at different intervals. The teachers and students have different timetables within the week and are managed in such a way that 2163 students are divided nearly equally to have lunch in their canteen in three different time slots between 12 noon to 2 pm.

Mr. Turk had a formal talk with me for 3-4 minutes then he started discussion about the topic of day “integration by parts” on his laptop and it was projected on a large screen for students to see. There was a complete lesson plan with detailed explanations and its relation to real world problems. It surprised me how focused he is and his high-level of concern for the development of mathematical skills of his students. It was a useful observation for me that if teachers emphasize their objective of teaching in each class it will definitely increase performance of their students.

Meanwhile the students were entering the room and taking their seats as the period was to start at 8.30 am and my partner teacher was there before 8 am opening his room. Some wished good morning to their teacher. They were not in uniforms, with different haircuts, a small handbag with eatables, mobile and scientific calculator inside. They were mostly 11th and 12th grade students (although a few are in 10th grade because students can study courses at an accelerated pace if they choose to) and reached school by driving their cars or trucks (like cars). They must have a driver's licence which is possible in the USA after 16 years of age. They were very humble, disciplined, obedient and made hardly any noise in the classroom.

They can sit in small circles or mixed row column wise, purposefully move, discuss, eat, and go outside with a pass. They justify such freedom with their disciplined behaviours. The incidents of indiscipline are rarely observed in the classroom. There were no directions from Mr. Turk to students regarding discipline in his classes because there was no need for it. In a rare incident outside the classroom there was a small fight between the students, but no teacher or staff intervened as they are not supposed to interfere for safety reasons. Teachers are instructed to immediately secure other students’ safety and call the school police and within 2-3 minutes the school police intervened and the matter was taken to the discipline committee.

At 8.30 am, there were 21 students in the class and after attendance of students Mr. Turk projected his lesson on the board. He reviewed questions and students were interacting by raising their hands for reply or query like in every classroom. I find that during his teaching the students were also talking to each other, but their talk was productive and it was curriculum focused. Suddenly there was an announcement through the public address system and all were standing by putting their hand near their heart. It was the pledge they were taking: "I pledge allegiance to the Flag of the United States of America, and to the Republic for which it stands, one Nation under God, indivisible, with liberty and justice for all”, there were a few daily announcements as they have no morning assembly in their schools.

I was trying to catch the fast class communication between teacher and students. Also, they covered a large number of questions and concepts in these 90 minutes. It was possible due to the blending of technology in the classroom at the highest level. The students were using their electronic gadgets and struggling with the given task.

The performance of the students in final exams is given on a scale of 1 to 5. Mr. Turk was highly concerned with the low performance of a few of the students. The basic reason we discussed was lack of practice and their learning gaps of lower-level mathematics. They were similar to what I am facing in my classroom.

After an hour in the class Mr Turk introduced me to the class and told the students that I was a Fulbright teacher of Mathematics from India and will be interacting with you on this topic. It was a pleasant surprise for me (and for him), however I have requested the same from him during discussion. Before this no student was paying much attention to me as they are used to having visitors in their classroom observing what they are doing. After my introduction, the students were enthusiastic to know and interact with me as I was an unusual visitor, and they were very excited to hear from a teacher from India. 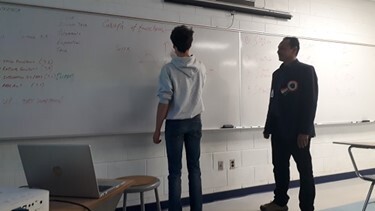 After self-introduction, I was asking questions to students to know about them but they were replying by sitting as usual. It was different from our classroom situations. I told them that in India the students pay highest respect to their teachers and in our culture the guru is given highest regard even above the God. I cited sanskrit shloka guru Brahma, guru Vishnu.Guru devo Maheshwara guru sakshat param Brahma tasmai shri guruvey namah and told its meaning. They understood more of what was expected and became more attentive and started paying respect by standing while replying to my questions. Then I switched to Integration by parts topic and observed that they were not shy when I asked them to voluntarily solve a question on the white board. Two students started solving different questions on a huge white board and a third student jumped in to discuss and help each other. It was an excellent moment for me to watch them solving while they were enjoying themselves too.

Mr. Mohan Sharma is a lecturer in mathematics at the Government Model S.M. Senior Secondary School in Indora, Kangra district of Himachal Pradesh. He has 23 years of teaching experience. He has a master’s in mathematics, a bachelor’s in education and a diploma in computer applications from Himachal Pradesh University in Shimla. He is a resource person for conducting training programs for mathematics teachers at the state level. He guides teachers on adopting different strategies to teach difficult mathematical concepts and using ICT in teaching mathematics.

He attended the Fulbright Teaching Excellence and Achievement Program 2020 at University of North Carolina, Wilmington, NC for six weeks.

My journey through the University of North Carolina Wilmington - Mohan Sharma (India, 2019/20)