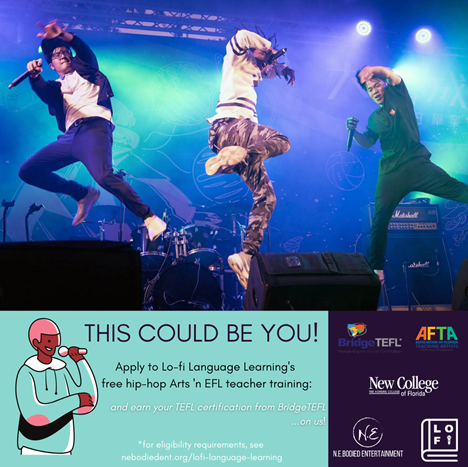 During my Fulbright grant I realized how global the hip-hop culture has become and how that could be leveraged as a learning opportunity for teachers and students alike. I wanted to create a path for more students of the game like me to use rap as an entry point to more than just the music industry

The idea for Lo-Fi Language Learning was spawned as a continuation of New College of Florida’s Freestyle & Floetry Tutorial, a course founded by advisor Dr. Carl Shaw and myself. I was happy to teach hip-hop performance even if only for its transferable skills, but I wanted to expand toward designing a sustainable model for training more instructors in teaching through hip-hop’s mediums. After interacting with the expat scene in Taiwan during my Fulbright grant - between Fulbrighters and unaffiliated English teachers from other countries - I realized how global the culture has become and how that could be leveraged as a learning opportunity for teachers and students alike. I then wrote my thesis as an evaluation of the pilot program I devised to test my curriculum’s fit with the EFL classroom.

The experiences afforded me by Fulbright went beyond just the degree. I took my time exploring the island, playing rap shows from Taipei to Tainan and meeting several of the dopest musicians I’d ever encountered along the way. Most of the fellow expat artists I met found themselves teaching by day and trying to pop off their artistic careers by night. I saw room for harmony in that space between their interests and profession; I wanted to create a path for more students of the game like me to use rap as an entry point to more than just the music industry.

Our application is live, and can be found here! We encourage the hip-hop inclined who are seeking to add an arts education pedagogy - and free TEFL certification from our partners at Bridge to their skill sets. Our program is currently accepting five participants for our virtual pilot program, due to begin in February. We are targeting applicants 18+ who identify as hip-hop artists and/or wordsmiths (MC’s, slam poets, storytellers, etc.) and are interested in a teaching or curriculum design career.

Ultimately, we are aiming to provide professional development and international networking opportunities for applicants who represent underserved communities and have a less traditional path towards achieving their classroom credentials. This would be a great fit for applicants who could be prospective Fulbright ETA applicants, or former ETAs looking to expand their careers in TEFL without the financial capabilities to pursue the option due to the pandemic’s strain on economies. I encourage anyone curious who is looking to apply, collaborate or learn more about us to email me at mw.iton@nebodiedent.org!

The power of hip-hop

In my research, I discovered the unique phenomenon of how hip-hop has expanded past international class barriers in several countries since its “founding” in the US. More than just speaking to the aesthetics of different “global englishes” worldwide, the culture of hip-hop has given volume to vocal stylings of the common citizen of most any society. I personally came into my journey as a creator in hip-hop through identifying with the stories I was able to catch up with as my adolescence approached the cusp of the streaming era: while I could bump to the latest radio hits, I was more fascinated by running through 2Pac, Wu Tang and Jean Grae’s back catalogs. Beyond the smooth wordplay and hip instrumental trends, I think the narrative that each artist offers in their work contributes to the building of modern-day mythic heroes we identify with and learn from.

My current inspirations are my fellow artists from Banana Kingdom, our Taiwan clique of MC’s, DJ’s, singers and creators. I maintain that LilKrake is one of the best MC’s I’ve had the honor of personally meeting after collabing with him in two languages, and NASI will bring one of the smoothest voices of awareness to how rich the contributions of Taiwan’s indigenous communities have been to the culture of the island.

My inspiration is a composite of stories and morals imbued in me by those both near and far, family and friends, allies and even enemies. I developed in the mediums of film and rap music largely because those were the channels that carried the visions of greater good I paid attention to as a youth. When I’m on stage as Irie Givens, I feel a responsibility to this composite to represent my inspirations well through my charismatic words. When I produce a film as Miles, I feel just as compelled even though I’m behind the scenes.

The quote that inspired me the most to speak to the social issues I address goes back to 2pac: “I may not change the world, but I promise I will spark the brain that [does].” As much as I value expression, creating a message larger than me (or even one where I am not the subject or “good guy”) reminds me that it’s not on my ego to fix all that I see as broken. Rather, I put it on my nature as a human being to want better for those like me navigating broken systems. Performing and creating has taught me that there are more people “like me” than I could ever know.

Miles Iton is an interdisciplinary educator and multimedia artist from Miami, Florida. After receiving his MA in Creative Industries Design from Taiwan’s National Cheng Kung University thanks to the Fulbright program, he parlayed his thesis project into the hip-hop EFL teaching startup Lo-Fi Language Learning. His work in the industry stretches from DJing and hosting live shows (when COVID permits) to producing ethereal concept albums, award winning indie shorts and festival quality music videos. As Irie Givens, his international recordings can be found on most streaming platforms. Outside of music and film production, he currently contracts clients as a digital marketing specialist.