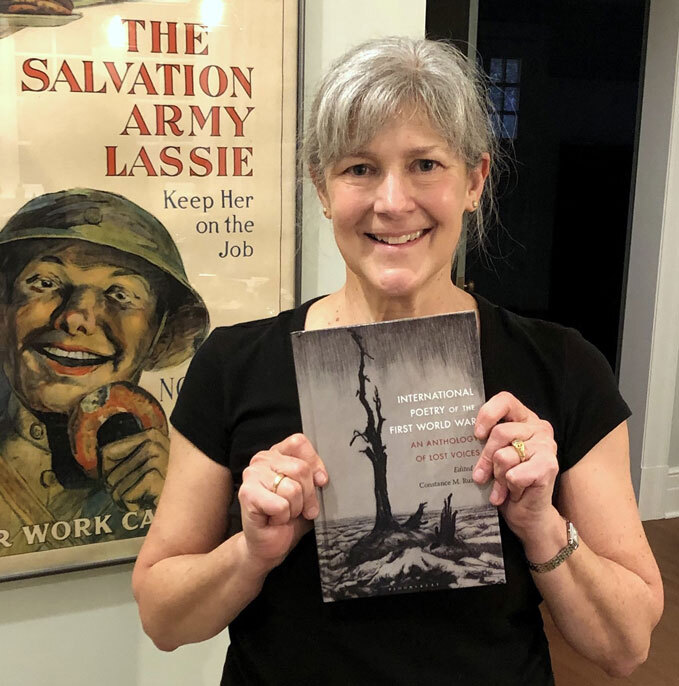 This project’s work has been a rich adventure, and it is my hope that readers will encounter the same pleasures of serendipitous discovery, finding new and meaningful voices, histories, and poems in this collection.

As the poems in my anthology demonstrate, there was no single representative experience of the Great War, nor was there a typical response to the conflict. And that is important, because poetry anthologies have long served as a crucial means of preserving and shaping literary, cultural, and social histories. Toni Morrison has written, “Canon building is Empire building. Canon defense is national defense. Canon debate … is the clash of cultures.” The canon of First World War poetry started to be established around 1930, with a new impetus from the 50th anniversary in 1964, and since that time, it has focused almost exclusively on a select number of British soldier poets who fought on the Western Front and wrote in protest of the war. In recent years, there have been increasingly numerous calls to expand the range of voices and perspectives of First World War poetry, but few modern anthologies have included a representative sample of poems written by women and noncombatants, and fewer still have included poems not originally written in English.

International Poetry of the First World War: An Anthology of Lost Voices is intended neither to supplant nor to challenge the value of previous anthologies, the poets, or their work, but rather to supplement the canonical poetry of the war and to be read alongside it.  Recovering the diverse body of war poems that were originally published and reading them with a deeper appreciation of their social, cultural, linguistic, and historic contexts can provide a richer understanding not only of war poetry, but of the war itself. 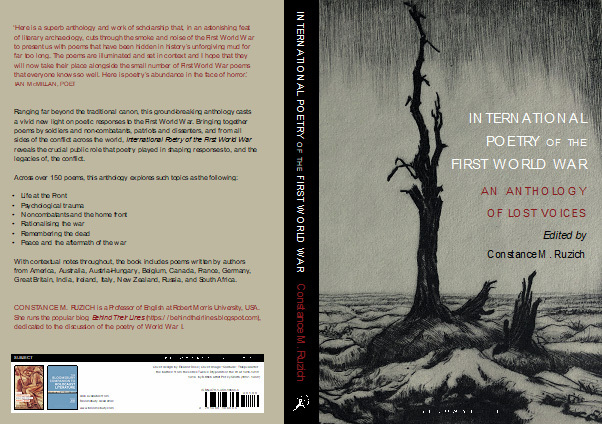 When ordered directly from Bloomsbury’s website, the code GLR TW5 can be used for a 35% discount

Happy mudlarking: Assembling the International Poetry of the First World War: An Anthology of Lost Voices

Mudlarking is the activity of searching the muddy foreshore and banks of rivers for anything of value. I moved my search for lost literary treasure on to dry ground, discovering lost poems and voices in second-hand bookshops, historic society collections, libraries, and museum archives. Digital collections were also invaluable. Numerous poems included in the anthology were written by people who did not identify primarily as poets, but who felt the need to respond to the war and to shape meaning out of their experiences of patriotism, fear, trauma, and grief.

It was particularly rewarding to discover and recover women’s war writing from England, Scotland, Ireland, France, Germany, India, America, Australia, and Russia. Various factors, among them the evaluative criteria used to shape the canon of war poetry, have ensured that much of the poetry written by women in the First World War has been erased from memory. Both patriarchal societies and the military establishment have frequently attempted to distance women from war. Cynthia Enloe discusses ways in which combat has been viewed as “society’s bastion of male identity,” arguing, “Women as women must be denied access to ‘the front’…. And yet, because women are in practice often exposed to frontline combat, the military has to constantly redefine ‘the front’ and ‘combat’ as wherever ‘women’ are not.1 It is a myth that women did not experience the physical horror of the First World War:  French and Belgium women’s homes were overrun by invading armies, British women were killed in bombing raids, and Armenian women were massacred along with men and children. The first industrial world war challenged the concept of the home front as a safe zone that was separate from the war. British suffragist and pacifist Helena Swanwick wrote in 1915, “War is waged by men only, but it is not possible to wage it upon men only. All wars are and must be waged upon women and children as well as upon men.2 And though most women lacked first-hand experience of the battlefront, it is impossible to deny that women had first-hand experience of the war. In many women’s war poems, war has escaped its boundaries; women writers reach across border lines as they challenge conventional ideas about women’s distance from the war and seek to bridge the gap between themselves and other women’s experiences. American writer Amy Lowell in her poem “September, 1918” describes the effort that many must have felt as she describes her “endeavour to balance myself / Upon a broken world.”

Many poems haunt me, particularly those that mourn the loss of youth and innocence, such as Scottish officer E.A. Mackintosh’s poem “In Memoriam,” written for a private he was unable to save;  G.B. Smith’s poem “Let Us Tell Quiet Stories of Kind Eyes,” which remembers Robert Gilson, one of J.R.R. Tolkien’s friends and a member of Tolkien’s first fellowship; or Lucie Delarue-Mardrus’s “Regiments” and Ruth Comfort Mitchell’s “He Went for a Soldier,” both of which describe young recruits marching to their death, accompanied by celebration and cheers.

But perhaps my favorite poems are those with compelling back stories such as Hedd Wyn’s “War” (“Ballads of boys blow on the wind, / Their blood is mingled with the rain”), Tom Kettle’s “To My Daughter Betty, the Gift of God” (written shortly before his death), Clifford Dyment’s “The Son” (written for the father who was killed when Clifford Dyment was a young boy), or Gladys Cromwell’s “The Extra” (written by an American nurse volunteer who was overwhelmed by the trauma she witnessed in France and who took her own life).

This project’s work has been a rich adventure, and it is my hope that readers will encounter the same pleasures of serendipitous discovery, finding new and meaningful voices, histories, and poems in this collection. (When ordered directly from Bloomsbury’s website, the code GLR TW5 can be used for a 35% discount.)

Connie Ruzich was a 2014-2015 Fulbright Scholar at the University of Exeter, where she researched the use of poetry in British centenary commemorations of the First World War. She is the editor of International Poetry of the First World War: An Anthology of Lost Voices (Bloomsbury, 2020), and she runs the popular blog Behind Their Lines, which discusses poetry of the Great War. Her essay “Distanced, disembodied, and detached: Women’s poetry of the First World War” appears in An International Rediscovery of World War One: Distant Fronts (Routledge, 2020), and an essay on wartime language and identity will appear in Multilingual Environments in the Great War (Bloomsbury, 2020). She is a professor of English at Robert Morris University in Pennsylvania, and you can follow her on Twitter @wherrypilgrim.