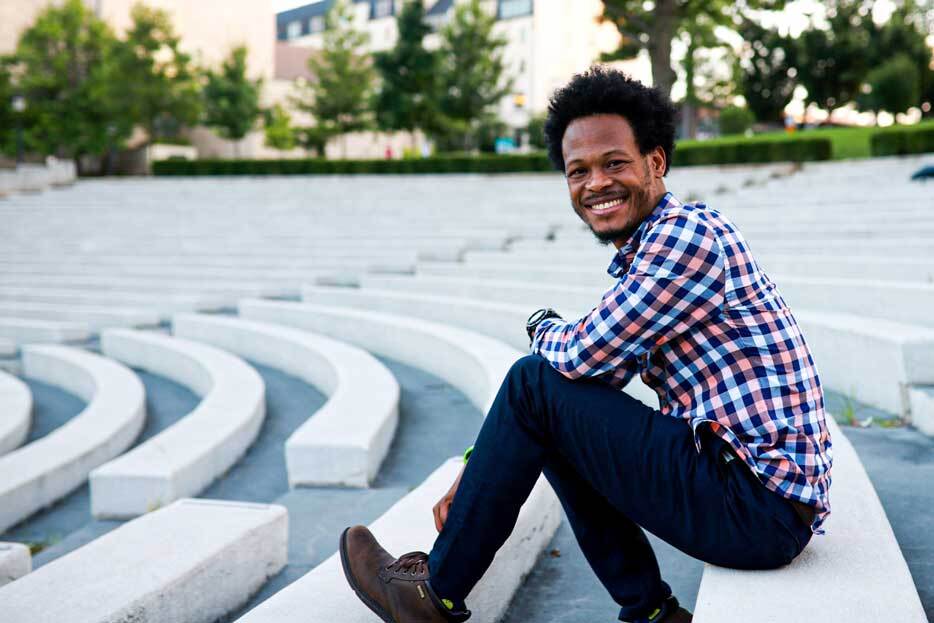 Socially-informed documentaries can create spaces for real conversations about social problems. I am thrilled to be a part of this movement.

A Promising Voice is the story of a Black and first-generation student navigating the predominantly white University of Arkansas. It is set for release in 2020

This film, A Promising Voice, was set up as part of my Documentary class assignments at the University of Arkansas. My idea was to document the journey of a Black student to understand what it's like being a student of color in a predominantly white college campus. I discovered an interview with Dekarius Dawson on the university website, where I learned that he had been the only Black student in the music department for a long time, and on top of that, the first person in his family to go to college. He sounded intriguing and confident as regards the future. And once we met up to discuss the project, his driven and passionate personality spoke to me. So, I was very deliberate not to portray him as a young Black man who faces hardships, as we often see in mainstream media. My approach was to tell a story of hope, passion, and dignity.

One of the lessons that I take throughout the filmmaking process is that it's not enough to have minoritized groups in the room when it comes to diversity and inclusion. Implementing appropriate policies to answer each group's specific needs is also an essential step that institutions need to take. In the case of the University of Arkansas, for instance, because of Dekarius, the music department had to change its eurocentric academic curriculum to include contents that refer to the world of black music. In fact, it's been realized that Black students don't necessarily enter the program with the same music literacy as their white counterparts. I am glad that this film resonates well with the ongoing conversation about racial justice in U.S. society in the wake of George Floyd's killing.

Grad students are typically busy due to a large number of academic obligations to meet; that is even more so for international students like me who also have to figure out the American way. Still, I know it is my responsibility to play a role in fulfilling the Fulbright program's missions of cultural exchange and mutual understanding. And spending hours only in classrooms or libraries would not be enough to learn about American culture. One of the best ways to do so is to go out to discover places and interact with people.

This film was indeed a golden opportunity for me to explore some aspects of the country. For example, over the Thanksgiving break, I had a great time with Dakarius's family in Memphis while I was filming. I enjoyed the food, the music, the murals, and the city's vibe. That was one of the very few times I felt at home. It also amazed me to see how many similarities that Black family shares with a typical Haitian household: their natural enthusiasm and their warm interactions. We also spoke about my parents and my home country. My interviews with other professors, faculty, and church leaders - not all of them appear in the final cuts of the film, unfortunately - were very enlightening exercises for me too.

It’s clear that there is a distrust of media among both political leaders and the public. But I think professional and high quality journalism has never been more critical to our democracy, to put information into perspective and help citizens be aware of facts and keep those in power accountable. Of course, the rapidly changing nature of information in our times forces reporters to provide a snapshot of the people or events that are the subjects of media coverage. This could leave unanswered questions and cause frustration.

In the sense of continuity, socially-engaged filmmakers can do - and therefore have done - a good job of bringing back to life stories of marginalized and forgotten people by exploring more in-depth the extra layers of social issues like unemployment, homelessness, mass incarceration, and immigration, to name a few. Nowadays, technology has made the job even easier for storytellers and allowed access to those contents to broader audiences everywhere. You can feel there is a hunger for social justice documentaries when you see how people have massively responded on social media to the Netflix mini-series When They See Us (which will be the topic of my master's thesis).

Many misunderstandings in society are due to the fact that human beings often use their preconceived ideas to make assumptions about others. Socially-informed documentaries can create spaces for real conversations about social problems. Ultimately, they can be successful as an instrument of education and social change by encouraging mutual understanding and making people look at things or other people differently. I believe that, as the CNN commentator Van Jones states eloquently, ''the future of the human civilization is the future of storytelling.'' And I am thrilled to be a part of this movement.

I am a proud Fulbright Scholar and a graduate student at the University of Arkansas. With nearly five years of experience in journalism, my works have been published in different news outlets in my home country, Haiti, as well as in Canada and the United States. I also co-founded a multimedia platform, Enfo Sitwayen, dedicated to civic education and practical information on the public process. My communications skills have been valued and strengthened as I have been involved in various nonprofit organizations.

Now the master’s program in journalism leads me to a new passion: documentary filmmaking. My first short documentary, A Promising Voice - the story of a Black and first-generation student navigating the predominantly white University of Arkansas - is set for release in 2020. I look forward to developing my career as a journalist and filmmaker to inspire hope and change through people's stories from around the world.