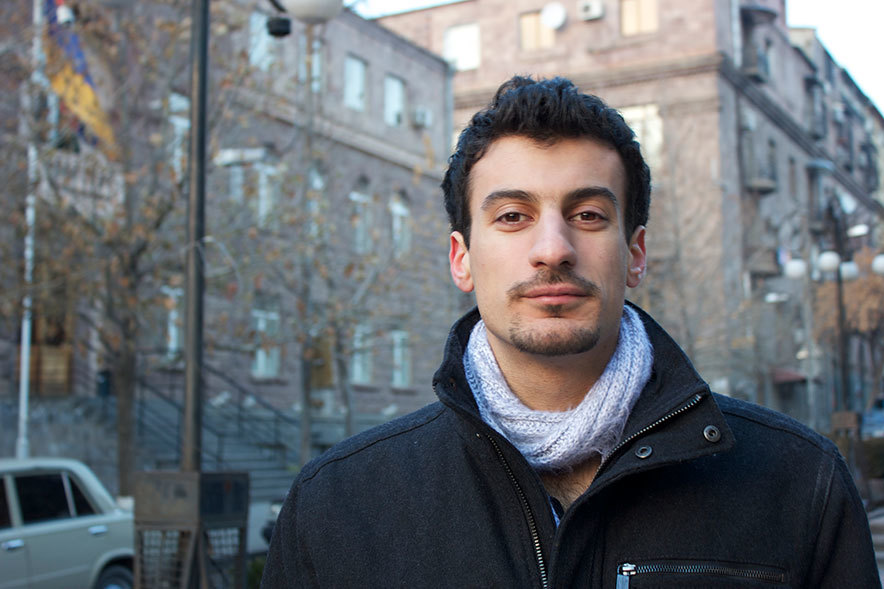 I started Letters for Peace because I wanted to do something to contribute toward improving relations between the people of Armenia and Azerbaijan [...] Students' letters, which articulated the desire and hope for a peaceful future, offered a refreshing and courageous perspective that is missing in the widespread hostilities which play out on the battlefields and regional media

I studied the role of formal volunteerism and the arts during my Fulbright research fellowship in Armenia from 2012-2013. My time overlapped with a series of elections. A coalition of election monitors taught me about the mechanics of local voter fraud, a process involving years of manipulation and intimidation culminating in more-overt violations at the ballot box. Monitoring village and city precincts, I witnessed representatives from the government’s wealthiest parties distribute cash to voters, escort elderly and infirmed citizens to “assist” (i.e. determine) their vote, and cut electricity during the vote count in order to stuff ballot boxes. Accounts like mine were, unfortunately, commonplace. When European election observers declared during a local press conference that the February 2013 presidential vote, resulting in the incumbent’s second term, was generally acceptable, an activist stood in front of their podium and presented the truth about the electoral fraud orchestrated by the government’s ruling party and their allies.

This action at the press conference illustrated democracy in action: citizens taking responsibility for their country’s well being, and rejecting the normalization of lies. I was fortunate to have worked with that activist, and noticed that she and her contemporaries espoused a holistic democratic transformation, one that situated electoral reform as just one step in overcoming Armenia’s litany of woes. From money laundering to deregulated mining to the marginalization of women and LGBTQI+ citizens, I began to understand how the corruption rampant in Armenia’s government and affiliated institutions exacerbated the fragile condition of the society, economy, and environment. Yet the local activists — with their commitment to the rule of law — refused to stay silent.

When Armenia’s next election occurred in 2018, the controversial two-term president from the ruling party had pushed a constitutional reform to extend his rule as prime minister for another five or ten years. But the citizens, led by the activists I met during my Fulbright fellowship, took to the streets in an unprecedented wave of nonviolent protest. They occupied government buildings, shut down major roads, and took to the streets demanding free and fair elections. Those protestors were victorious, reinforcing the definition of an active citizenry that takes responsibility and action toward democratic reforms. Those lessons have inspired the writing I practice and teach in the areas of identity, politics, memory, and media. And they have inspired me to apply those principles of active citizenship toward my community and country at a time when our own democratic institutions are in peril.

Today’s youth are tomorrow’s leaders. I’m hopeful that their letters represent one small but necessary step toward conflict transformation

Letters for Peace united several passions of mine: writing, culture, and coalition building. While pursuing an MFA in nonfiction writing at Columbia University, I led creative writing workshops at Rikers Island Jail Complex and the Manhattan VA. In those settings, I experienced the transformational impact writing pedagogy can have for those our society might overlook. In terms of culture, I cherished my experience as a first-generation Armenian American. We spoke Armenian at home, and during summers, we would visit our Armenian relatives in Beirut, the city where they had escaped a generation earlier after surviving the Armenian Genocide.

When I first visited Armenia in 2007 as a volunteer, I was struck by the country’s homogeneity (95% Armenian), a byproduct of decades worth of animosity with neighboring Turkey and Azerbaijan that resulted in closed borders (80% total) with those countries. While Turkey was the historic perpetrator of a genocide it still fails to recognize, Azerbaijan’s fault involved a dispute over Nagorno Karabagh, a mountainous region situated between Armenia and Azerbaijan. After the Soviet Union collapsed, the two countries fought for that land, a war that lasted until 1994. The subsequent ceasefire has remained fragile as Armenian and Azerbaijani soldiers still engage in sporadic fighting.

I noticed two contending narratives in Armenia toward Azerbaijan: nostalgia for more peaceful times when the two populations lived together during the Soviet Union, and resentment toward a combative foe often described with problematic rhetoric. It did not help that Azerbaijan’s government and society had their own tendency to use problematic rhetoric describing the Armenian “other.”

I started Letters for Peace because I wanted to do something to contribute toward improving relations between the people of Armenia and Azerbaijan. To do this, I recognized that the very first step is dialogue, so I focused on fostering an exchange. Thanks to support from Davis Projects for Peace and Eurasia Partnership Foundation, I was able to implement my project. In Baku, Azerbaijan and Yerevan, Armenia, we organized two-week workshops at the intersection of creative writing and conflict transformation. Each student concluded the workshop by writing a letter that was translated and sent electronically to their counterpart on the other side of the closed border. Their words, which articulated the desire and hope for a peaceful future, offered a refreshing and courageous perspective that is missing in the widespread hostilities which play out on the battlefields and regional media.

Today’s youth are tomorrow’s leaders. I’m hopeful that their letters represent one small but necessary step toward conflict transformation. Before the war, Armenians and Azerbaijani coexisted harmoniously as neighbors and friends. These letters show that the everyday citizens — including those born into a world of conflict with the “other” — seek a return to that friendship and cooperation.

Vahé Berberian — for his innovative approach to Armenian culture through the lens of comedy, drama, painting, and writing.

Jennifer Finney Boylan — for the gravity and levity with which she approaches questions of self and society.

Steve Martin — for embracing his musicality on the banjo, and various modalities of writing for the stage and the page.

Layli Long Soldier — for experimenting with poetic forms to produce powerful work that exposes the crimes committed against indigenous Americans.

Raffi Joe Wartanian teaches undergraduate writing at Columbia University, where he recently completed the coursework for an MFA in Nonfiction Writing, and also holds a Masters of International Affairs. His writing has appeared in The New York Times, The Baltimore Sun, No Dear Magazine, and elsewhere. Raffi is the recipient of fellowships and grants from the Fulbright Program, Eurasia Partnership Foundation, Humanity in Action, and Davis Projects for Peace. In 2017, he launched Letters for Peace, a program at the intersection of creative writing and conflict transformation between 54 youth in Armenia and Azerbaijan. Raffi earned a BA in history from the Johns Hopkins University before working at a refugee resettlement center in his hometown of Baltimore. He is the proud grandson of Armenian Genocide survivors, and son of parents displaced by Lebanon's civil war. In December 2019, Raffi published Critical Distance, his second album of original musical compositions.