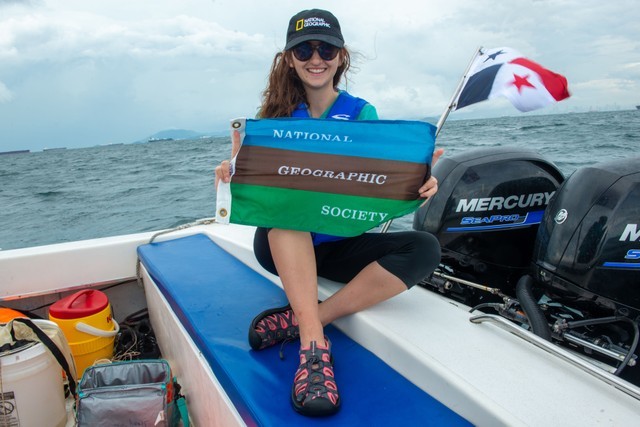 Hola! My name is Jennifer Gil-Acevedo and I am an environmental scientist from Puerto Rico working with microalgae at Florida International University. I interned at the Smithsonian twice and was also an AAAS Mass Media Science & Engineering Fellow who worked at CNN en Español. ⁠
⁠
As the first Latina Fulbright-National Geographic Digital Storytelling Fellow in 2018, I traveled to three Smithsonian Tropical Research Institute facilities in Panama, collecting microalgae samples. I documented my research in Spanish and English through blogging, microscopic pictures, and videos. I did an activity where visitors used their senses to discover the invisible world of microalgae. I studied interdisciplinary science at the University of Puerto Rico and recently completed my master’s in Environmental Science at Florida International University.⁠
⁠
For nine months, I explored Panama’s two oceans and Gatun Lake, the reservoir created to feed the Panama Canal, in search of microalgae. I did three things with the  samples: identify them to species, add them to a STRI database that documents the country's biodiversity and use them to educate the public. My project is called, “The Invisible Story of Microalgae."⁠
⁠
During my collection trip to Gatun Lake in a Panama Canal Authority boat, I gained one of my most memorable experiences. That day I was carried a field microscope and took the opportunity to show the captain and his crew the microalgae she had just collected with their help. The captain told me that he had taken a lot of people in that boat for scientific purposes and it was the first time someone explained what they were doing. This is why I am a Digital Storytelling Fellow. I want to communicate science to everyone.⁠
⁠
#fulbright #fulbrightlatinx #digitalstorytellingfellowship #natgeofulbright #nationalgeographic