An international community is more than vague names on a page. It gives you hope for everything. It saves your life every day

In Europe, one must admit that the Midwest area is usually not considered as an obvious destination for studies or even travels. Somehow it attracted me, and had a certain appeal to me because the deep US musical imagery has fed my imagination through songs and movies. I can still recall being 17 and listening for the first time to Johnny Cash and his song Big River, starting with the verse "I met her accidently in St Paul, Minnesota (…)", I can remember tales from European elders who traveled on the Michigan Lake, speaking about the Midwest polar vortex and the blizzards. Crazy stories, sometimes exaggerated, sometimes very true. These iconic places like St Paul, Minneapolis, Milwaukee, the Mississippi were already there in my mind, as a fantasy I knew without knowing, and I felt so privileged to embrace the whole reality of it. It was the experience of a lifetime. And it still is to this day.

At first, the most challenging side was of course Winter. Having grown up in the South of France, I was apprehensive. I had no clue, and as simple as it gets, I just got used to it! Same goes for the food, the clothes and the social habitus of Minnesotans. Experiencing the exotic flavors of deep fried crocodile snacks, the leather boots and layers, and of course the legendary Midwest Nice was something to remember. There was a cultural shock, and there will always be one in such cases. But being part of an international adventure just makes you stronger, smarter, more human in some way. I discovered myself being able to connect more than before with new people. The friendships that started here and the memories of my community here will stay with me. A famous poet from Duluth, MN said that life is about creating yourself. I think this is very true, and I also think that the friends I made during my time here have helped me find my own self in some way.

Today I am writing those lines from my student room in St Paul, in the wake of what turned out to be a global pandemic challenging every single aspect of my daily life as well as many others’, thousands of miles away from home. I watched many friends leave, have been through a lot of heartbreaking moments and personal dilemmas. But this community and this role I found here just kept me going to this day. For them. For me. ‘’Locked inside of the U.S’’ but somehow feeling like I belong here and I have to complete my duties. An extraordinary situation that I couldn’t have handled one year ago, for sure. But I discovered in such a context that an international community is more than vague names on a page. It gives you hope for everything. It saves your life every day.

Our podcast, Choúkrüt, was Minnnesota born and raised! Landing in Eugene, OR, at the beginning of the journey, I already had something in mind. Then I met my colleague and dear friend Tomislav (Fulbright FLTA, Austria). Very quickly, we realized that our own perspectives, our languages, our differences and personal ways of deciphering the world could lead to valuable creative content. We worked on this concept. The word choucroute came randomly in one of many conversations that we had: we decided to make it our own. From the intonations of this French term designating a German meal (sauerkraut), we added a Spanish accent and a new orthograph to create our own word. And we had the perfect name for an international podcast! Little by little, we started, with our own equipment: first, a phone and a computer. Like a pirate radio. The more we recorded, the more we were enthusiastic, and at some point, as we shared it, someone came to us with the proposition of a regular studio slot on campus for more professional recording and broadcasting. We then developped sharper outlines, better themes and techniques, and most of all, invited guests we met through our journey. This last aspect educated our appreciation of cultural difference more than anything: cultural variation does not stop at a language, a grammar, or the movements of a tongue. It is a multitude of eyesights and sensible perceptions. It is part of our personal everyday and we don’t necessarily see it right away, but it is our richness, and we have been honored to let our guests ‘invent’ the show at the same time as we did. 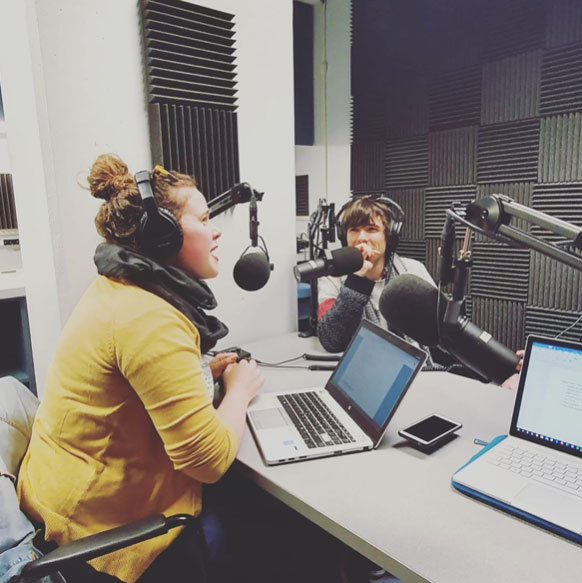 Following that pattern, early in the second semester, we decided to move on from a traditional us and them cultural shock perspective, and we welcomed a new permanent host, in the person of Kimberly Nickel, a teacher from Minnesota, who provides an American perspective on every aspect of the podcast now. She is a driving force for each episode and she has filled us with an energy and positivity that we are translating into inspiration every week. Thanks to her and to the team we started, Choúkrüt can make it through the stormy weather.

In 2015, a troubadour from Minnesota came to my hometown. I saw him perform twenty feet away from me and it changed my life. This man was Bob Dylan, and the first piece of music I’d like to mention would be his newest song called Murder Most Foul. Dylan has something similar to the poets of Ancient Greece in the ways he writes, acts and performs. He created songs large as life, songs in which you can reflect and live for a while, like in a home for the soul. His sense of humanity and spirituality is forever inspiring to me. In this new song he shared during the pandemic, the  narrator questions more than ever the American identity, going back to a dark day of November 1963, when President JFK was killed. Then he travels through time and space and delivers a flow of references to books, movies, songs through 17 minutes of a lyrical crescendo. It blew me away. His lyrics shed light on the world through the darkest times. I was lucky enough to see him perform again during my stay in America, in October 2019.

The second piece of music I want to mention is both an album and a visual document. It is Aretha Franklin’s Amazing Grace. Filmed in a Baptist church of Watts, in 1972, it is the most electrifying Gospel performance I have ever listened to. Seven years after the Watts Rebellion in this very same neighborhood, she delivers a spiritual manifesto and a call for the repossession of life and hope over fear and hatred. The movie captures her commanding presence, voice and musicianship better than any document. Halfway through the show, she sits down at the piano, and, in a hurricane of serenity, she performs Amazing Grace in this church of Los Angeles. Generations and voices of multitudes can be heard through her voice.

The third and last piece of music I’d quote is a song called Sunday Morning Coming Down, written by Kris Kristofferson, and made famous by Johnny Cash. To me, this song captures the essence of Country and Folk in the purest way. Kristofferson knows well about this drunken drifiting man on a Sunday morning sidewalk, because he has been wearing that skin one too many times. And when he sings it, it can’t sound phony, or made up. It just sounds like three chords and the truth: Saturday night through Sunday morning. Light after dark. Faults and redemptions. I had the chance to explore the Music City on my last big trip before the Covid-19 outbreak. When you walk in the streets of Nashville, music is the beating heart of a people. Kristofferson, Merle Haggard, John Prine, Johnny Cash, those songwriters are kings, and their songs live forever through the voices of others. Through music, America will always find its best Redemption.

Nicolas Lovichi is a History & Cultural Studies master’s graduate from Paris Sorbonne and a 2019-2020 Fulbright FLTA from France in St Paul, Minnesota. While in the US, he launched and hosts now on a weekly basis the Choúkrüt podcast with his friend Tomislav Markovic (Fulbright FLTA from Austria). His areas of work are American Music History, and Cultural Communication. You can listen to the Choúkrüt Podcast here:  https://anchor.fm/chokrtthepodcast. You can connect with Nicolas on Instagram and Facebook.

Hear more from Nicolas in his recent interview as part of the net:work?: A Fulbrighter conversation series